Violence against trans people is often later reframed as benign, or even acceptable behavior. This reframing of violent behavior or language often occurs when it is perpetuated by a self proclaimed “ally”, either by the ally themself or by their fellow allies. In these cases it is difficult for a trans person to speak out against this violence without challenge, especially when it is committed by a much beloved pillar of the cycling community; someone who may be actively doing good on behalf of some women/trans/femme (WTF) racers.

Track cycling, which has a strong history of minority participation from its origins, has seen an increasing presence of WTF racers over recent years.  Yet, race directors, coaches and track directors who are advocates for WTFs are unfortunately rare and greatly needed. And, the loss of a single local driver of equality and inclusion may cripple growth of WTF participation in the sport for an entire region.

If we understand that calling into question one of these rare, public advocates for WTFs in the sport may result in a ripple effect, slowing growth of participation, then what is the goal of of asking the ally to own up to their offense?

Do we want them to stop coaching beginner WTF racers or stop putting on skills clinics? No, we need coaches who are interested in coaching ALL athletes.

Do we want them to stop advocating for WTF racers when other men are acting badly? No, it is imperative that men hold other men accountable for their actions.

If the answer to these questions is “no,” then why is ownership of past violence important or necessary when it potentially damages the ability of bad allies in their attempts to engage WTF racers? I argue that the point is honest public discourse of the complexities of allyship, the separation of behavior from identity, and ultimately achieving an acceptable apology to and means for closure for the person or community experiencing harm.

For the sake of discussion, I’ll tell a story:

A couple of years ago, a group of cisgendered men engaged in retaliatory, targeted, in-person and online harassment and intimidation of a trans person after denying that person’s requests for women’s field equality.  Of those men, one is a loudly self-proclaimed advocate for women and trans people’s participation in track racing. His participation in this ridicule and harassment lent validity to the public mockery of the trans person, and helped to set the tone for an ongoing hostility at the local velodrome, ultimately leading to the trans person leaving that local racing community and shutting down social media accounts and cell phone. That ally ceased this harassment only after being confronted by a mutual friend. No additional contact for the sake of apology was made. The man who engaged in this violence did not start it, and did not finish it.  Yet because of his status as an ally, his participation cemented the lasting effects of the violence. He returned to his own local community in a different state, where he increasingly establishes himself as an advocate for WTF participation in cycling. One might even say that reputation is an integral piece of his brand as a coach and sponsored athlete. He then declares himself as the defender of WTF racers within the sport in public forums online, stating “part of my job there is to make sure everyone feels comfortable and welcome,” going so far as to attempt to ban a badly behaved fellow racer from the velodrome because of a sexist and hurtful article published in media 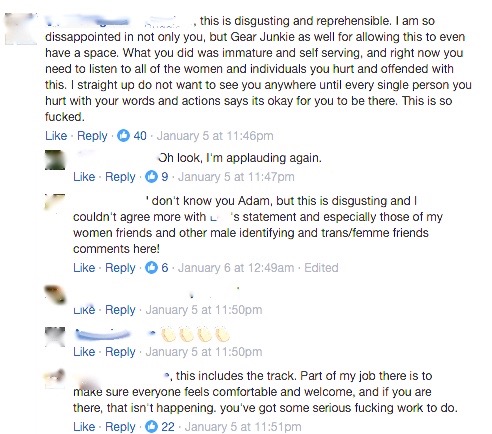 In response to the response of said ally there is applause from many in the community, and his allyship is reaffirmed. The trans person who was previously harassed experiences repeated trauma, and contacts the previously self proclaimed ally and now self stated defender of WTFs. After being contacted by the person who he harassed in years past, the ally makes a vague and self-congratulatory public apology for “unknowingly engaging in online bullying” in the past, with no mention of the severity, consequences, or the targeted, retaliatory and gender-based nature of the offense. He receives more applause from his community for being such an upstanding example of a good ally. Then, he thanks the trans person who he had hurt for their patience, and sends a tearful picture of himself. The trans person reacts with empathy, feels guilty for making the ally cry, and questions their own memory of past events (“maybe I’m overreacting,” “I feel like I’m going crazy”) in response to the gross minimization and claim of accidental involvement in past harassment.

By bringing awareness to an ally’s bad behavior, a trans person can inevitably expect to have to defend their claims, or the “realness” of the offense, as it is typically minimized or dismissed by those who reaffirm the offender’s self proclaimed allyship. What’s more, having to continually defend one’s self in the face of the minimization or erasure of past violence can constitute additional trauma. The question then becomes: Is calling out an ally-offender worth the continued stress of having to defend one’s claims?

The congratulation and applause of the ally for his public apology is similar to the applause for his verbal unwelcoming of a poorly behaved man from his track in the way they reinforce the isolation and silence of the trans person who was previously harassed. The tearful picture is ultimately emotional manipulation. It serves to reinforce the gaslighting effects of the public apology where the engagement in harassment is minimized to accidental involvement in some generic bullying. Maybe it was all just a mistake after all? Maybe I’m overreacting? After all, he seems like a sensitive, nice guy, right?

Additionally, the onus of the potential consequences of calling into question the offender’s self proclaimed allyship is often placed on the trans person, as a form of victim blaming. If it is known that this ally had harassed a trans person, it could compromise their role in cycling community, change trust in coaching relationships or cause loss of existing or future clients, and challenge the ability of that person to be vocal on behalf of WTF racers when very real threats from other sources are present. Of course, the truth is that all of these anticipated consequences are in fact because of the original bad behavior; the participation in gender based, retaliatory harassment in the example above. Loss of social capital, coaching business or sponsorship opportunity is because of the original poor behavior itself, not the naming of that behavior. Placing that burden upon the trans person affected is an added injustice.

If you identify as an ally, but you behave in ways that are harmful to some of the population you purport to serve, then are you an ally at all? We must also ask ourselves what motivates the claims of being an ally as an identity, particularly when it confers community status or other benefits. If there was no personal gain from claiming ally status, it is unlikely that there would be so many ally pins and t-shirts of sold (e.g.: safety pin merchandise).

Are those who behave badly ever able to claim ally status again? Who sets the threshold for adequate atonement? The pathway forward for those who wish to be known as advocates for any minority group should be one of introspection and accountability to those they wish to serve. Redemption for past bad behavior must include the ownership of said behavior, particularly when the expected consequences are high.

Identifying as an advocate for a minority group is a more complex mixture of beneficial, selfish, and detrimental behaviors than can be adequately captured in a single word.